Overview of Session Key Intercept - The Problem and The Answer

Our March 2021 technical brown bag has received praise from our customers, prospects, and partners for its in-depth informative content. As such, we wanted to break this session down, allowing you to dig into the areas of interest in a consumable blog format. Main topics included in this series:

With that, let's get to it.

Nubeva SKI is a Better-Faster-Easier and More Secure TLS Decryption Solution - Nubeva SKI (Session Key Intercept) is an evolved alternative/augmentation to legacy decryption techniques. In this webinar, we specifically dive into how it is also more secure than other options on the market.

As of March 2021, we are primarily focusing our market efforts on the OEM opportunity of the SKI technology - working with application monitoring and security systems/suppliers. Secondarily, we are working with end-users looking to enhance and augment their existing systems.

Part 1a: Setting the Stage and The Problem with Legacy Decryption Techniques It's no secret that we live in a connected world where everything is software. Threats are everywhere - and not just cyber-threats but also threats to application performance. If everything is connected - speed, performance, and the ability to monitor, detect and respond to threats are critical to business. To do that, it is mission-critical to look at the actual data moving on the wire - and all of this data is TLS encrypted and must be decrypted to inspect.

Most of the options available were invented years ago, but protocols and networking have evolved, and these solutions are now unsound. This leaves manufacturers, solution providers, and their customers with growing visibility and performance issues.

Each of the legacy decryption methods has its own shortcomings:

Standard/Legacy decryption methods may "work," - but they are showing more and more limitations, they are expensive, and more disruption is coming that will continue to stress these systems 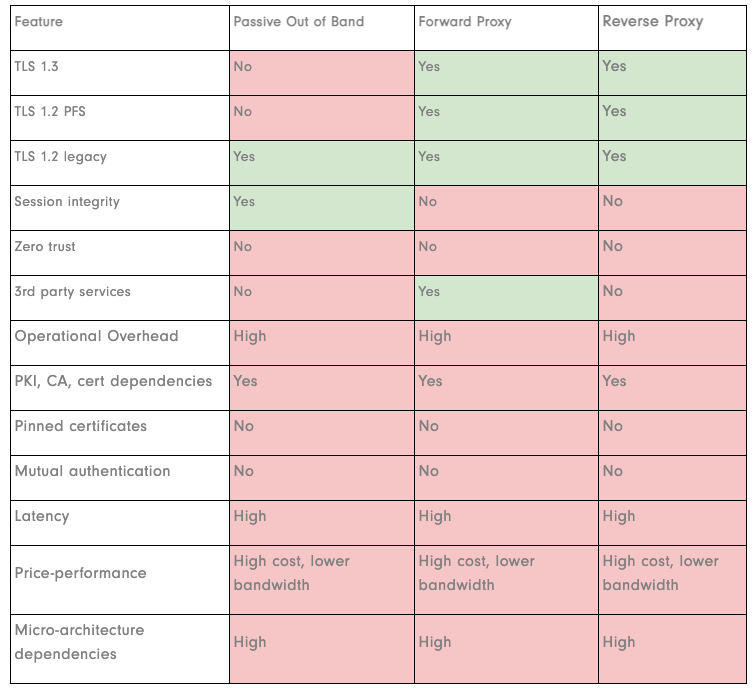 Part 1b: Nubeva Session Key Intercept is a New Method for a New Era. Nubeva essentially perfected and commercialized an age-old idea used by DevOps - keylogging. Traditional keylogging has never been treated as an enterprise solution as it has reliability, security, management, and other issues. Nubeva SKI offers a new option to transparently, automatically, reliably, efficiently, and securely learn and extract session secrets out of endpoints without modifying applications or changing their configuration in any way.

How does SKI Work?

Using our family of endpoint software, Nubeva SKI Sensors, extract final session secrets quickly and in real-time, forward them to inspection systems where they are paired with mirrored traffic for decryption and then ultimately destroyed. Nubeva's technology works with existing decryption technologies or decryptors supplied by Nubeva.

What are the Keys"?: When we use the words "Keys" or "Session Secrets," we are talking about individual session secrets, the symmetric keys that are used in the symmetric bulk encryption. These are low-risk, ephemeral keys - not the permanent public-private key pair used for authentication and key exchange, which are high-risk keys.

Nubeva's core IP has invented a technology (patented) to discover and extract session secrets from the TLS library code in process memory. We do this without changes to TLS libraries, application code, or their runtime environment configurations. Users provision the system service to run on an endpoint, server, or client., The service loads key extraction signatures. When a process is started the service detects which library it uses and selects the appropriate signature to locate keys in memory.  Then the service waits and listens for a client hello (at the beginning of a TLS session), and from there, the sensor knows where the session secrets will appear, in what sequence. The sensor extracts those secrets in under 200 microseconds, which is before the handshake even completes. The sensor does not extract the traffic, the keys only (which has added benefits we will discuss later - both in performance and security). From there, the secrets are securely forwarded, via encrypted tunnels, to authorized destinations.

Nubeva's support is far-reaching and growing constantly. We are in the business of updating and maintaining signatures to ensure full decryption coverage. See the signatures we support here: Supported Libraries and Operating Systems

Once you have those keys, decryption is easy and efficient.  Utilizing Nubeva's FastKey Protocol, send session secrets where they are needed, whether an inline or passive system, a key aggregator, or even storage for forensics and lawful intercept downstream.

The FastKey Protocol  used DTLS, with a HTTPS/REST back-up for reliability. Keys are sent over PFS encrypted tunnels to customer-defined destinations using secured credentials. Essentially, Nubeva has created a "KeyPlane," if you will. Keys are not derived from the traffic, they are derived from the endpoints, and therefore the traffic is never touched, architecture isn't impacted, authentication isn't messed with, and the TLS connection integrity end-to-end is maintained. This FastKey protocol enables secure and high-speed decryption. All you need to do now is send the traffic from any source, tap, span, existing packet broker, or native when inline and match the keys with the client random for the specific session to decrypt - it is just that simple. And you're done!

This concludes Part 1 of our Brownbag recap. In Part 2, we will dig into the pros and cons of Nubeva's Session Key Intercept approach.