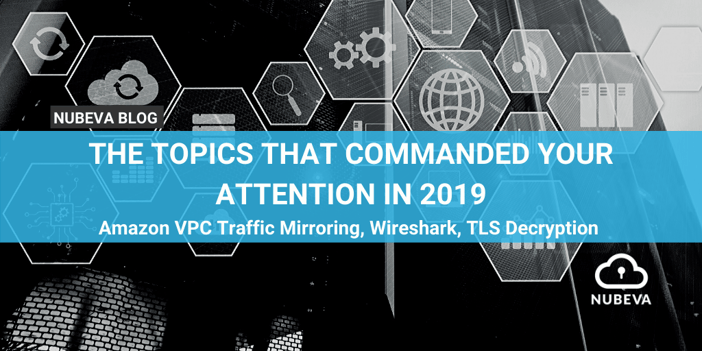 TL;DR It’s time to reflect on 2019. In this post we take a look at the blog topics that generated the most interest from readers last year. VPC traffic mirroring, using Wireshark, the impact of TLS 1.3 encrypted traffic and symmetric key intercept architecture top the list. Read on...

The last year (and decade!) proved to be a year of fast-paced movement in how enterprise IT organizations managed and secured their public and private clouds. As more and more data moves across cloud subscriptions, it’s important to “see” the details of the data in order to manage all facets of security.

With that said, here is a brief recap of the four most-read Nubeva blog posts from 2019. These topics will continue to capture interest in the new year.

In August, Amazon Web Services joined a growing number of native cloud tap providers with its announcement of Amazon VPC traffic mirroring. Nubeva was a participating company at the launch of Amazon VPC traffic mirroring, and together, we collaborated to create and unlock traffic visibility in the AWS Cloud. Amazon VPC traffic mirroring creates agentless, infrastructure-level packet traffic directly from the Elastic Network Interface (ENI) level of AWS workloads to in-cloud tools for network and security monitoring, troubleshooting and pcap storage. Nubeva TLS Decrypt enables you to monitor and see this traffic in details to identify potential threats, anomalies and other issues.

Make Your Wireshark See All

Wireshark is a core application in any security professional or systems administrator’s toolbox. As the world’s leading network traffic analyzer, Wireshark analyzes network traffic in real-time for troubleshooting, event inspection and forensic analysis on flagged anomalies and threat detection. Whether in the cloud, where TLS standards are managed and enforced by your cloud provider, or on-prem, organizations are moving to higher levels of end-to-end SSL/TLS encryption for improved compliance and security - TLS 1.3 and Perfect Forward Secrecy (PFS) being the protocol in place today. Using Nubeva TLS Decrypt, you can now maintain end-to-end encryption and the ability to decrypt modern SSL/TLS traffic out-of-band!


Perfect Forward Secrecy in TLS 1.3 makes network communications more secure but also renders traditional out-of-band impossible and man-in-the-middle decryption at cloud-scale untenable. The new TLS 1.3 standard ensures everything is locked down with new, stronger ciphers, rapidly rotating "ephemeral" keys and certificate encryption - good for security, bad for visibility. Nubeva created a new, modern architecture that makes out-of-band decryption possible for TLS 1.3 and does so in a way that works with any cloud platform, any packet capture or brokering service and without requiring code changes, architectural changes or workload impact.

What is Symmetric Key Intercept Architecture


Nubeva developed a new way to see encrypted traffic using Symmetric Key Intercept architecture. This new solution lets IT teams maximize modern data encryption standards while also gaining full visibility into data at the packet level when and where needed. The solution enables the discovery and extraction of final symmetric encryption keys after the handshakes are complete. Nubeva’s Symmetric Key Intercept secure architecture maintains separation of specific session keys and mirrored traffic until the call for decryption on your tools of choice. allowing your teams and tools dig into anomalies and fully monitor for security threats.

What topics are on your mind? Send us an email (info@nubeva.com) or Tweet us @NubevaCorp and let us know how we can help you get the traffic visibility you need in the cloud.