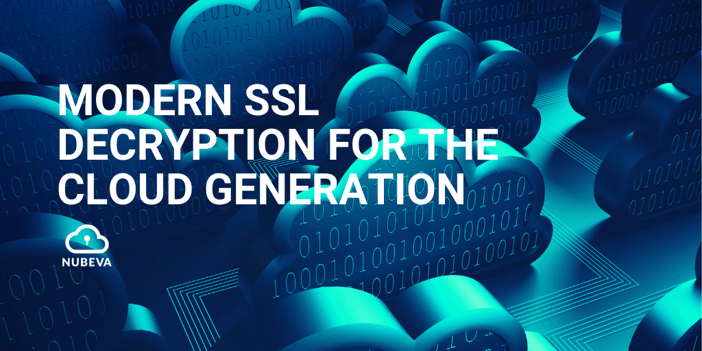 Perfect Forward Secrecy in TLS 1.3 makes network communications more secure but also renders traditional out-of-band, man-in-the-middle and decryption at cloud-scale untenable. The intent of the new TLS 1.3 standard is that, if you want to inspect and monitor traffic, you must do so at the endpoints because everything else is locked down with new, stronger ciphers, rapidly rotating "ephemeral" keys and certificate encryption. Nubeva has created a new, modern architecture that not only makes outof-band decryption possible for TLS 1.3, it does so in a way that works with any cloud platform, any packet capture or brokering service and without requiring code changes, architectural changes or workload impact. This paper explains the challenges posed by forward secrecy in TLS 1.3, the reasons traditional MITM and out of band solutions don’t work and how Nubeva's new, architectural approach is superior. Nubeva is the choice not just for the next-generation, but for the cloud generation.

Forward secrecy is a decades-old concept that is now required in TLS 1.3. Forward secrecy means 2 things. First, it means that each session is separately encrypted. This makes it much harder for bad actors to compromise data in motion. Even if one session is captured, subsequent sessions will still remain safely encrypted. Second, it means that both the TLS client and the TLS server participate in the encryption key creation for each session. The TLS handshake starts with an asymmetric key exchange and public certificates like before. Then, using separate processes, the client and the server use the asymmetric key to arrive at a final, “symmetric” key. Because this final key is used only for the duration of the session, it is ephemeral. This final, symmetric, ephemeral key is what actually encrypts and decrypts the packet traffic for each individual session. These ephemeral keys can also be renegotiated periodically as well for further security (e.g. renew every minute). Over the course of a day a pair of workloads communicating back and forth may generate thousands of separate, final, ephemeral keys, even though the public/privates keys and certificates remain the same. If a server has 1000 sessions it could be generating 1000 unique, final keys per minute.  As mentioned before, TLS 1.3 requires forward secrecy.

This all means that data in motion, especially data in the cloud and travelling between workloads of distributed (i.e. containerized / microservice architected) applications, is much better protected than before. That protection comes at the cost of visibility.

However, there is also a challenge to cybersecurity tools and processes. Network security tools like intrusion detection systems, behavioral analysis systems, data loss prevention systems, threat hunting and forensic systems and others inspect packets as they traverse the network. These systems look for malware and other indicators of compromise or bad actors. These tools must decrypt the packets for inspection. Where before they could rely on a single pre-shared key or certificate information to decrypt every message, with TLS 1.3 they cannot. Indeed, they are hindered even in TLS 1.2 settings where PFS is used. There are thousands of keys now and certificate information is now itself encrypted.

Inline tools like firewalls and intrusion prevention systems will be set up as a man-in-the-middle architecture to act as a proxy for incoming traffic. They will participate in the TLS handshake as if they were the intended client and decrypt, inspect, then re-encrypt the traffic and send it on. This method becomes quickly untenable in highly distributed environments where you cannot afford to put expensive in-line firewalls in between each and every workload that is sending packets back and forth. Furthermore, with forward secrecy, any MITM proxy set up now has to handle thousands of TLS handshakes where before they had to handle just one. Even if deployed, this becomes prohibitively expensive and tremendously slow from a performance standpoint.

Because only the endpoints of TLS 1.3 sessions have access to the final, ephemeral encryption keys, security appliances that are out of band or deployed in a MITM architecture that are *not* a proxy are blind to the packet traffic payloads they need to inspect. Out of band architectures for security and monitoring tools is preferred since it does not disrupt network communications, impact application performance or induce latency.

From a security perspective, TLS 1.3's new PFS requirement and updated cipher requirements is great for external privacy. There are no more "keys to the kingdom" for decryption. And even if you get your hands on some ephemeral keys you need the exact segments of packets for that part of a session, in exact order for it to work. It’s great security, and carries much lower risk on the keys than before. But it comes at the cost of visibility and the resultant ability to inspect, secure and control your data and your applications with your tools, your processes and your teams.

Nubeva did something different. Nubeva looked at the problem and realized a few things.

Nubeva TLS creates an architecture supported by software to restore out-of-band decrypted visibility to any environment:

Nubeva TLS decrypt is an architecture that essentially creates a key and decrypt plane separate from the data plane.

How does it work?

There are 4 components to the new decryption architecture.

The implied intent of the new TLS 1.3 standards, and the backwards-compatibility of PFS in TLS 1.2, is that, if you want to look at your traffic, do it at the endpoints because everything else in between is locked-down.  This is why every cloud vendor (Amazon AWS / Microsoft Azure / Google Public Cloud) and many cloud / internet services now defaulted to this level of security. Increasingly, 3rd party web services and solution providers thwart man-in-the-middle decryption options with pinned certificates. It should be noted that certificates are now invisible since certificate information is encrypted in the TLS handshake.

The decryption architecture developed by Nubeva delivers amazing features and advantages: Nubeva’s TLS decryption architecture supports all forms, protocols, ciphers of TLS/SSL.  It is extensible to future changes due to signature rule based key extraction model. It works for native host apps, containers, client and server side sessions.

The key agent is available as a container, native linux, or soon Windows Schannel versions. It is completely scalable from 1 to 100,000+ monitored sources with Tbps-capable throughput.

There are no application or code changes required.

There are no VPNs to setup or manage for transport of cleartext.

The extracted final keys can work with any other system that can read your keys and your packet captures (e.g. Wireshark).