Making Container and Kubernetes Decryption in the Cloud Possible 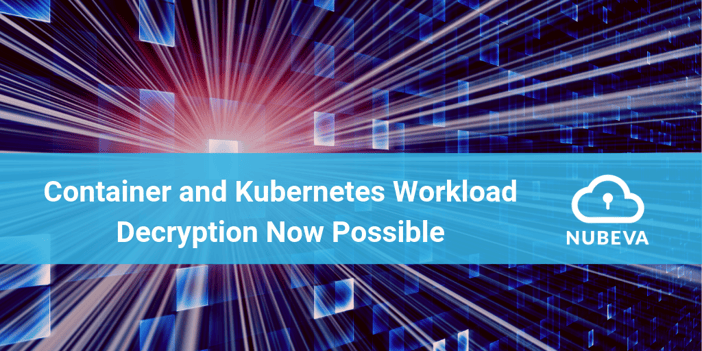 tl;dr: Strong, end-to-end encryption is a top recommendation for securing applications across public, private and hybrid cloud infrastructures. Now, Nubeva's TLS Decrypt solution out-of-band, decrypted visibility in the cloud. Using breakthrough Symmetric Key Intercept technology, you can maximize encryption and security AND have the visibility you need into these workloads.

Today, September 4, we announced TLS 1.3 decryption support for container and Kubernetes workloads. This breakthrough decryption technology delivers decrypted visibility to packets moving between containers and Kubernetes clusters as well as to-and-from them. is the only 100% out-of-band solution that serves as an easy overlay option and requires no code changes, library modifications or changes to architecture or operations. With our patent-pending symmetric key intercept approach, we eliminate the “either/or” conundrum of security or visibility.

When or how would you want to decrypt traffic from your container or Kubernetes workloads? Great question.

There are many use cases, including these examples:

Here’s how your IT team benefits when using TLS 1.3 Decrypt in your public, private or hybrid cloud environments

Containers and Kubernetes workloads are the here and now for software and applications in the cloud. Try our TLS 1.3 Decrypt solution for free and unlock visibility into these workloads. Click for more information.